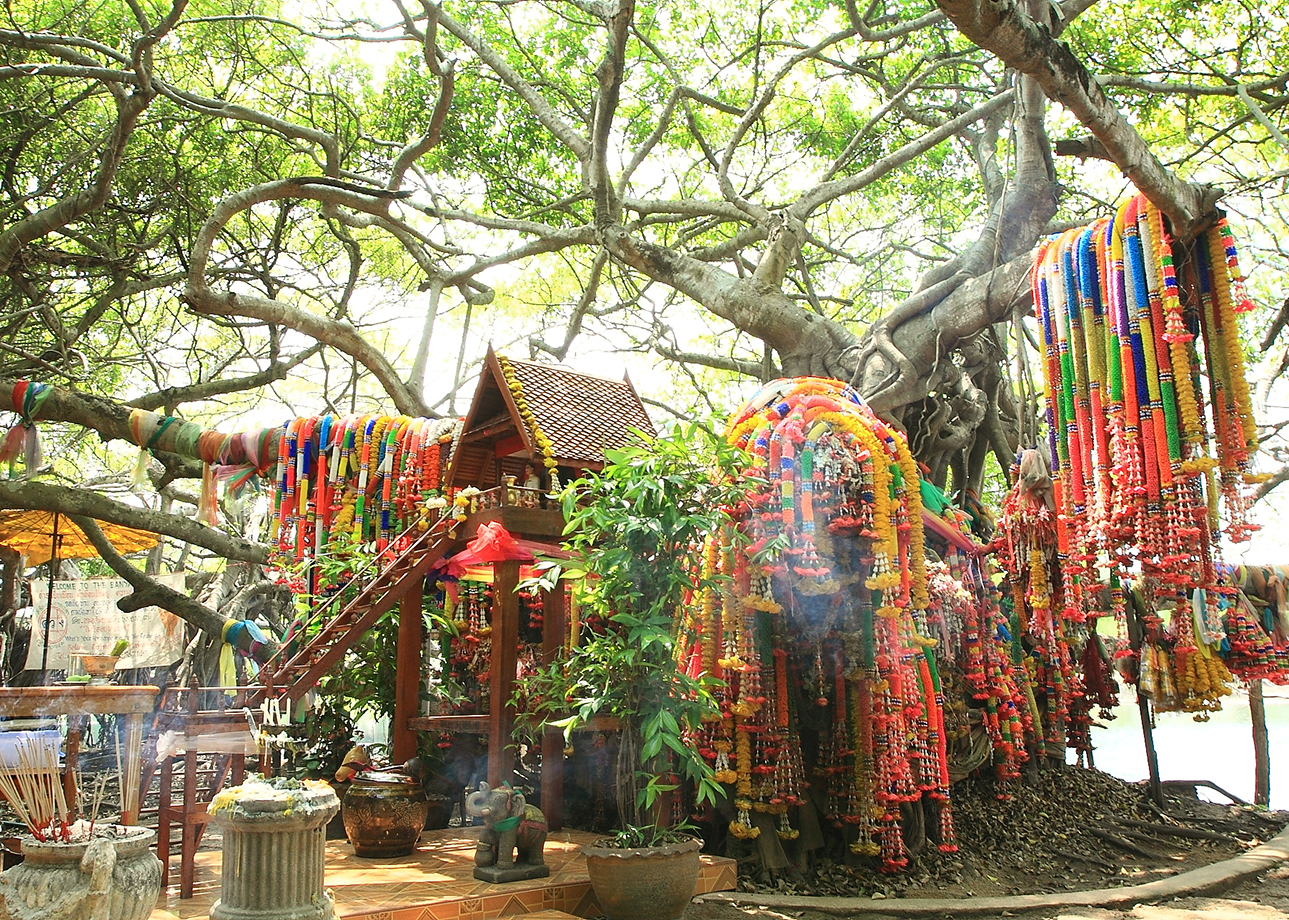 You just know when a spirit house has got it; that certain something, like the magnetism of a supernova ­­­ – a rare charisma that causes you to stop dead in your tracks and take a closer look, or at the least, save a snapshot of it in the little box of treasures folder of your mind.

The first rule of spirit house success is that it can’t be truly powerful without a power source. A daily blast of sunshine, root systems that won’t behave, a guardian spirit with a bloodline to the underworld, an unlimited supply of food and drink: these mojo generators are an intrinsic part of what makes a spirit house more than just a doll house perched on top of a post.

All of these power sources have a common ground: nature. Thais believe that nature is an obvious place to seek out energy to help them deal with life’s challenges and enhance success. Nature’s mysterious power infuses itself in different concentrations into different objects and beings. Often the more unusual and unexpected the phenomena, the more powerful it is. For example a large termite mound that suddenly appears in a field can have a reputation for increasing luck in business; a banyan tree with multiple offspring trees can produce winning lottery numbers; a piece of horn from a buffalo struck by lightning brings protection; a colorful polished stone found in the depths of a cave can heal illness.

Humans who practice meditation and asceticism, such as Buddhist monks and rishis, also generate high levels of natural power. Their energy is transmitted to others through the act of chanting, writing secret script on different objects, using the elements (fire, water, earth, air) in sacred rituals and drawing mystical tattoos. The results of wearing an amulet, drinking an herbal blend or rubbing an object (even your own tattoo) blessed by a master of power range from healing cancer or stopping a bullet to finding a life partner. Those whose skills prove effective become very popular and abound in legend even after their death.

In the spirit house tradition, trees are a main source of power. The roots of the tree extend into the underworld while the leaves reach up to heaven; they are considered intermediaries between heaven and earth. Before we understood the how trees and breathing beings exchange oxygen and carbon dioxide, Thais (and many other cultures) were already honoring trees by tying ribbons around their trunks and offering them spirit houses. When a spirit house is offered to a tree, it is for the spirit of the actual tree. Other times, a spirit house is placed near the base of the tree because the tree is used as a source of power for the land guardian spirits that cover a large area of land.

It’s hard to go anywhere in Thailand without noticing the diversity of power sources at work and is part of what makes Thailand so magical. But is it real? Does it really work? For many Thai people such questions do not exist. It would be like asking, “Is nature real?”

In modern language, the word ‘supernatural’ is often used to describe the belief in nature’s power and the invisible realm of beings that inhabit it. In his classic book Monks and Magic, anthropologist B.J Terwiel explains it beautifully:

“…the word ‘supernatural’ has connotations such as ‘more than natural’, ‘beyond nature’. While activities related to the aspect of ‘more than natural’ usually may be regarded from the religious angle, the exclusive use of the term ‘supernatural’ limits religious phenomena too much. After all, it is likely that there are cultures in which at least some invisible religious agents are seen as an intrinsic part of nature. Such seems to be the case in rural Thailand.”

The fact that spirit houses still persist in Thailand today shows that something is working. If anything a positive intention and hug to a tree could give us all a natural boost of power. It's worth a try!

For a visual experience of trees as POWER SOURCES watch the slideshow here: