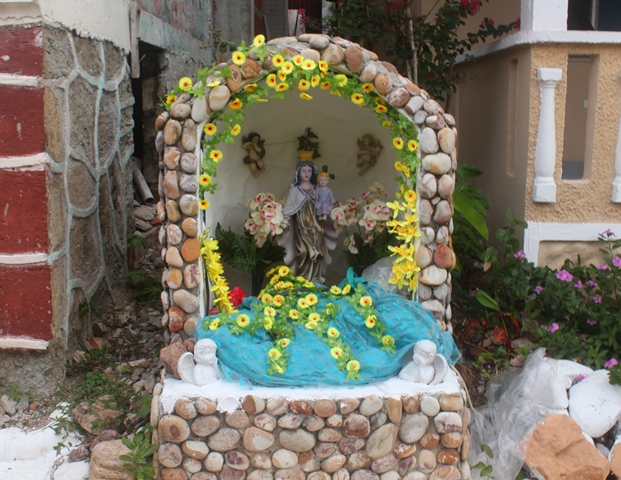 Our ferry boat arrives in the lazy afternoon. The air feels pleasantly cooler even though I can still see the high rise jungle of Panama City twelve miles away. At first impression Taboga is a humble and understated island and it is hard to grasp that it has been sought out as a refuge for tourists, US military, artists, pirates and fisherman since the 16th century. But as our golf cart driver takes us through a maze of candy colored houses, typical of the islands here, I can sense the soul of this place.

We have just enough time to set down our weekend bags at the Villa Caprichosa—a sun bleached Italian style bed and breakfast with a million dollar view—and head out to scout the little village of San Pedro. Its 5:00 p.m. and families are gathered in their homes with doors wide open, praying. Between banana trees and boys playing soccer, I begin to notice designated sacred spaces peeking out around every corner and ocean bend. La Madonna, saints, crucifixes and angels are watching over our every move. The whole island is a treasure trove of local shrines that share similar characteristics to Thai spirit houses, and I am very curious.

Each shrine, like a Thai spirit house has its own identity, reflecting the energy of the statue inside it and the personalities of the island’s devotees. Most of them are constructed out of brightly painted rocks stacked low on the ground as if the Madonna herself were rising from the earth. Larger shrines are raised on platforms, protected by glass, while others are molded on the tops of huge boulders like mermaids surrounded by sea foam. Many shrines are inlayed with the raw shells of mother of pearl, reflecting the light and power of the ocean with a striking similarity to the pearlized shrines on Putuoshan Island in China, the birthplace of the Chinese saint Guan Yin. What’s more, just like Thai spirit houses, the shrines are covered in bright yellow and orange flowers, the color of joy. When people pass by, rather than a Thai wai, they make the sign of the cross to pay respect.

It is no surprise that just about every corner of this prized island has a shrine to protect it. The original man to step foot on Taboga was the Spanish explorer Vasco Nunez del Balboa in the early 1500’s. In 1671 Henry Morgan sent his pirates to sack the island in search of pearls, gold and riches. Later Taboga was used as a fort to successfully fight off the attacks of Englishman John Illingworth, the Chilean warship Rosa de los Andes, and the Peruvian Frigate Pichincha. In 1887 the famous painter Paul Gauguin enjoyed the island life of Taboga on his way to Martinique. Taboga played a significant role in World War II and as a port in the construction of the Panama Canal. With its temperate breezes, abundance of fish and pineapple plantations, Taboga really is a treasure of the sea.

Local legend abounds miracles and saints. One legend tells of an apparition of a woman leading an enormous army that appeared in front of a pirate ship that was attempting to attack the island. To this day, Taboganos have venerated her as the Virgin del Carmen and believe that she is the patron saint of the island, the Thai version of a chao muang or guardian angel of a city. Taboga is also the birthplace of the region’s first living female saint, Santa Rosa de Lima who can be found venerated today as far away as Mexico, Peru and the Philippines. According to locals, Rosa lived in a charming house on the beach near Playa Hondo on the northern side of the island where she displayed unconditional love, healings and service to the people. In 1524 the dean of the Panama cathedral built La Iglesia San Pedro, the second oldest church in the hemisphere. On the outside, it is a simple structure in comparison to the elaborate cathedrals of Casco Viejo, but power can be heard in the chants of evening mass that resonate though the old walls into the courtyard, reminding me of Buddhist temple mass.

Throughout my travels it is hard to ignore the many cross-cultural similarities of our longing to connect to Spirit through the creation of sacred spaces. Collective symbols that represent Mother Earth, protection and light can be found from Thailand to Taboga. Here on one tiny island one can find the soul of devotion that beats through hearts around the world. No wonder Captain Morgan came here to find treasure.