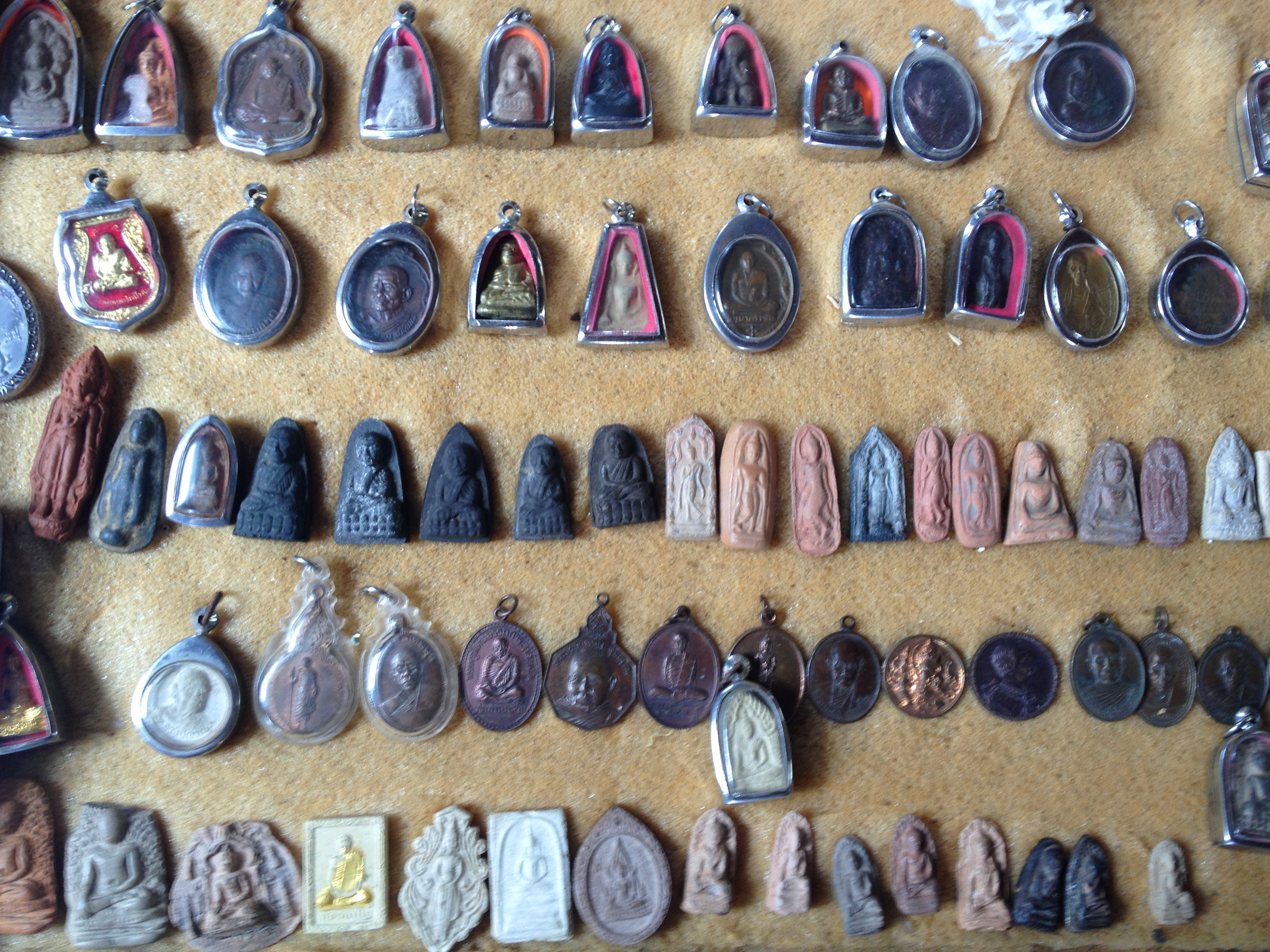 On my recent trip to Thailand I found myself spending more time at amulet markets than I had planned. The largest amulet market in Bangkok, called Talad Phra Kreung, is a playground of magical regalia and a must see if you are into supernatural adventures. At the market devotion, fashion, food and the spirit world merge to create a very sanuk experience.

Thai people believe that amulets are potent objects (kwan khlang) that have sacred power (saksit). Amulets consist of tiny pieces or fragments of relics which are fashioned into charms. These relics are worn over the hearts of men, women and children as signs of devotion and as protective talismans.

For hundreds of years, amulet making has been a part of the ritual in building a temple. As a gift to the lay community of donors who support the Buddhist Sangha, amulets were a tangible connection between the temple and its most important supporters. In Buddhism, the act of donating money to build a temple is one of the most meritorious virtues. This custom still persists today and each temple will put its own energetic signature, materials and design on the amulet connected to the event.

Wat Nok, a temple in Bangkok, recently made a hand painted amulet using a formula of 108 ingredients including various metals, clay, oils, honey, flowers and woods. Even rarer are those said to contain a bone fragment of the Buddha, monks ashes or a cosmic rock which fell from the sky. In the search for ancient amulets entrepreneurial scavengers will dig around old temples, unearthing shards, tiny stones, resins and broken Buddhas —all of which may have the inherent spiritual qualities to transform into magical relics. The “power” of amulets is not always inherent in the object. A proper amulet is super-charged with spiritual energy from a monk, shaman or magician who calls upon the spirit world to bless the amulet and its owner.

There are millions of amulets floating around Thailand, making for a serious business and an easy target for counterfeit sales of knock-off amulets. Last week I was lured into a magical realm on the floor of a Buddhist temple by an amulet salesman who showed me a beautiful Nang Phaya (a famous amulet for the ladies) and a mermaid talisman carved from the horn of a buffalo that was struck by lightning. “This is the only one left” he whispered as he quoted the steep price of 6,500 baht (US$ 220). While negotiating the purchase I realized that the charm of an amulet is more than just the amulet itself; it is the history and process of the acquisition which create a living transmission through the object. In that moment, I had crossed the line from hobby to collector. Was I ready to take responsibility for all these sacred objects that had passed through so many hands?

My first formal amulet viewing occurred was when I was seventeen. A Thai friend, who happened to be an amulet expert, took me to the home of a man he called “the God”, where I watched as the man’s eyes turned up into his head and his tongue rolled around his mouth as he became willingly possessed by a powerful spirit. When the God’s eyes returned to a forward glance, his face had changed along with his voice and language. I was so mystified by this process that I don’t remember anything about the psychic reading he gave me. When he returned “back” to his human body/mind/person we went outside and the men began to pass around amulets. I felt like a foreign girl allowed into a secret supernatural man’s club; it was all very exciting. “This one is hot, this one is cool” one of the men said as he passed around a couple of amulets. My friend got out his magnifying loop and raised the amulet to his face so he could check the details.

For the next hour they continued to pull amulets out of their pockets, like Houdini, cross-checking their intuitions with one another.

“This one is weak at first, but after time the energy grows very strong.”

“This is evil power.”

“This has little power.”

“This one is a monkey Buddha.”

Little did I know that they were choosing my amulet. “How does this feel, Marisa?” I held it in my hand and took a breath. It felt good, happy, magnetic and cool. “It’s for you.”

And that’s often how it works: the best amulets come to us unexpectedly as gifts from a special friend. An added bonus of receiving an amulet as a gift is that you know it is infused with loving kindness, nonattachment and gratitude, potent ingredients in any magical intention.

Different amulets have different special powers. Besides using intuition to sense the power in amulets, there are plenty of magazines, academic professors, and experts devoted to classifying their type and qualities. Many amulets are known to be antiques excavated from ancient temples. These can be worth millions of baht, such as the classic and rare originals of Pra Somdej, Nang Phaya or Pra Rod.  Amulets are so alluring they have become a supernatural trend with certain styles reaching high demand. In 2006 the oversized Jatukam Ramathep amulet (the “hip-hop” medallion version of amulet fashion) adorned the chests of men and women around the country. It first became popularized in 1987 by a Thai policeman who believed that the spirit of Jatukham Ramathep (an incarnation of the Bodhisattva Guanyin) had assisted him in solving a murder case. Other popular amulets can divert bullets from penetrating the body, help to attract good fortune and even cultivate sexual charisma.

Since amulets are considered to carry a vibration of power, it is very important to care for them properly so that the power is not lost; they should not be kept in the bathroom or dirty places, they should not go near a woman’s menstruation (the magnetic energy of female blood can suck power out of a man’s amulet), and they should not be placed below the waist or on the floor (there are certain talismans such as the ngan and palad khik that are exempt to this rule).

Generally, as with the sacred jewelry of any faith, Thai people wear amulets out of devotion, as a respect for the Buddha’s teaching. Living in a state of present moment awareness with radiant loving kindness is the best kind of protective amulet I can think of. But most Thai would agree that walking around like a Buddha is not always so easy. In a world where the lines between the mystical and the profane often blur, wearing an amulet (or a few) tucked under my shirt is the best spiritual insurance plan I have found yet.