< Prev
Next >
Rituals
Respect to the Erawan shrine and its victims
Thursday, August 20 2015 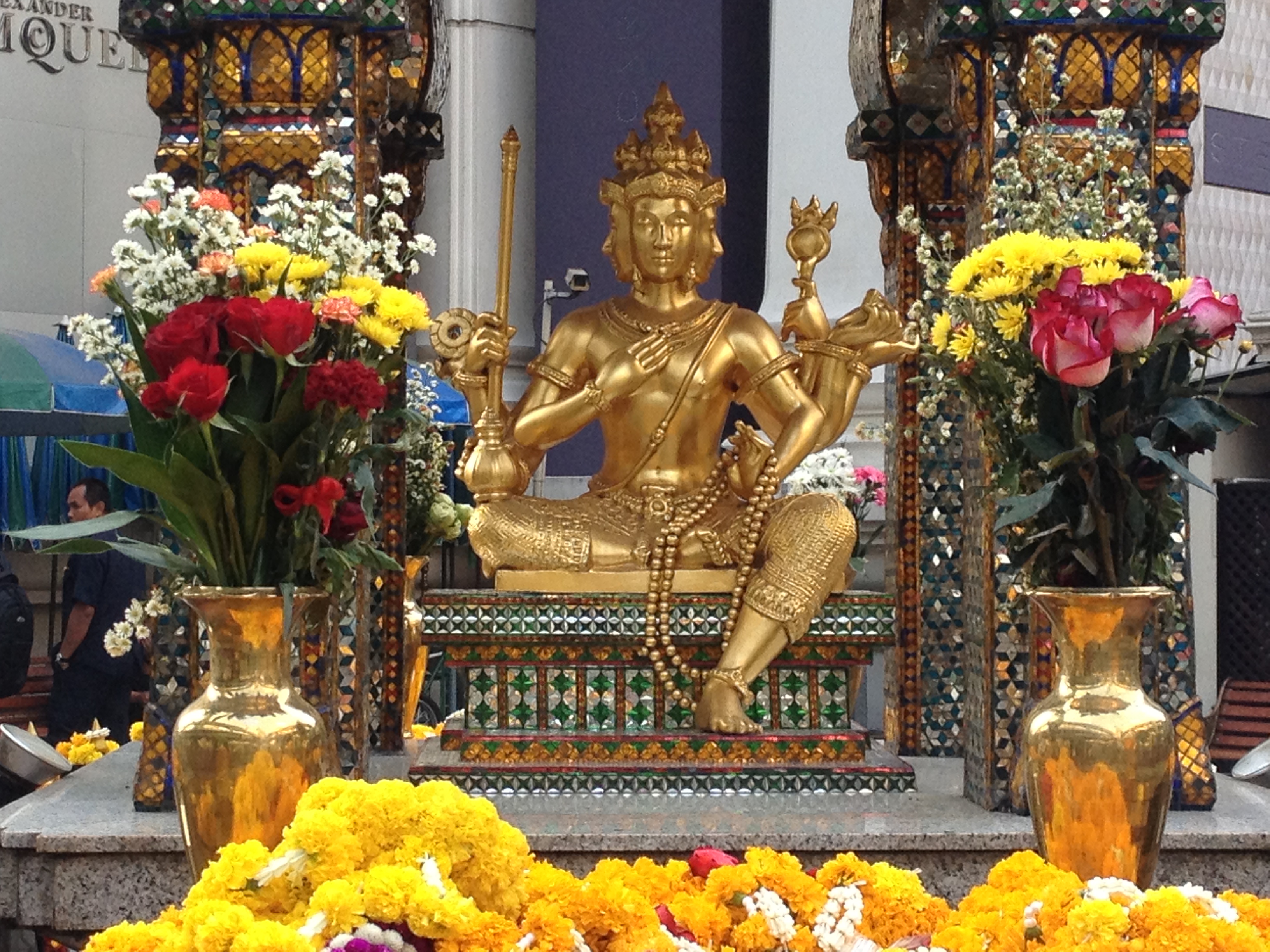 In honor of the Erawan Shrine and the victims of the bombing attack on August 17th, 2015 I write this blog post. My heart is with you all.

Anyone who has been to Bangkok has seen it, and now anyone who reads the news has too. If it were a pin on a magical Google map, it would be a large sparkling gold dot that says: “Make your wish here”. The Erawan Shrine is a little piece of heaven located in the central shopping district of Bangkok on the corner of the Ratchprasong intersection. Every day hundreds of local Thai, Chinese, Singaporean, Indian, Vietnamese, Korean and other international tourists weave around the shrine offering their hearts and dreams up in incense smoke. The main power source behind this wish fulfillment zone is the Hindu God Brahma, master of creation. Bhrama personifies the vibration of compassion, loving kindness, equanimity and mercy in Sanskrit called the Brahmaviharas. It is said that he is so benevolent and kind, he can hardly refuse to grant your wish.

The Erawan shrine has played a part in many chapters of my life's dreams coming true, and many thousands of others. The shrine is so holy that even when passing by in the car, Thai people take their hands off the steering wheel to pay respect. It is a landmark of light, a bold stamp of the royal monarchy, and the pride of the commercial success of the nation.

Juxtaposed comfortably between Prada and Alexander McQueen, the magic of the space is in its ability for trance-portation. Once you step inside you are involved in a sensual performance of serious intention that gets repeated four times. Brahma has four faces that skillfully look out on all four directions corresponding to beautiful virtues including the four Brahmaviharas. Repeating a ritual of prostrations that involves lighting candles, incense, and offering flowers four times over takes a lot of energy and focus. It is a great way to visualize a goal from within while expanding awareness without. By the fourth face, you definately know why you came. When your wish is fulfilled you have to come back to say thank you. This bargain method is like a psychological trick; the outcome has already been sealed with the deal. It may take years before some foreigners return to Bangkok to thank Brahma for granting their wish, but they keep coming back.

Visitors pray for the usual dreams of wealth or love, others for help in more serious matters; but it not necessary to pray for something at all. Just being in the presence of the offerings and connecting to the four virtues of compassion, loving kindness, equanimity and mercy remind us that the power of Brahma is within us all. And it is because of this positive light and successful wish fulfillment that millions of international visitors are attracted to the shrine every year. It is also because of this light that darkness has chosen it as the place to strike. Yet the main statue inside the shrine, Brahma, remains completely intact. Whether the statue was actually part of the target or not, we do not know, but the human causalities are enough to make the Erawan an historical monument of Bangkok’s transition into the next age of democracy.

Ironically, while the Thai government continues to conduct an investigation into the terrorist behind the attack without sucess, Thai monks are experts at clearing negative energy. Two days after the bomb went off next to the Erawan shrine (regardless that Bangkok is on high alert) 22,600 monks and alms givers channeled light to Ratchaprasong with their presence, and the shrine is already active again. It will take thousands of more fearless light workers to sort out the darkness swirling around Thailand but the age of decline is something Brahma and the Hindu texts already know about very well and remind us over and over again:

Where there is darkness, light will always triumph.

Purify the mind. Purify the heart. Cling to nothing. Cultivate the virtue and beauty in all beings. Keep a high vibration, determined, resolute and focused on global and inter-gallactic peace.