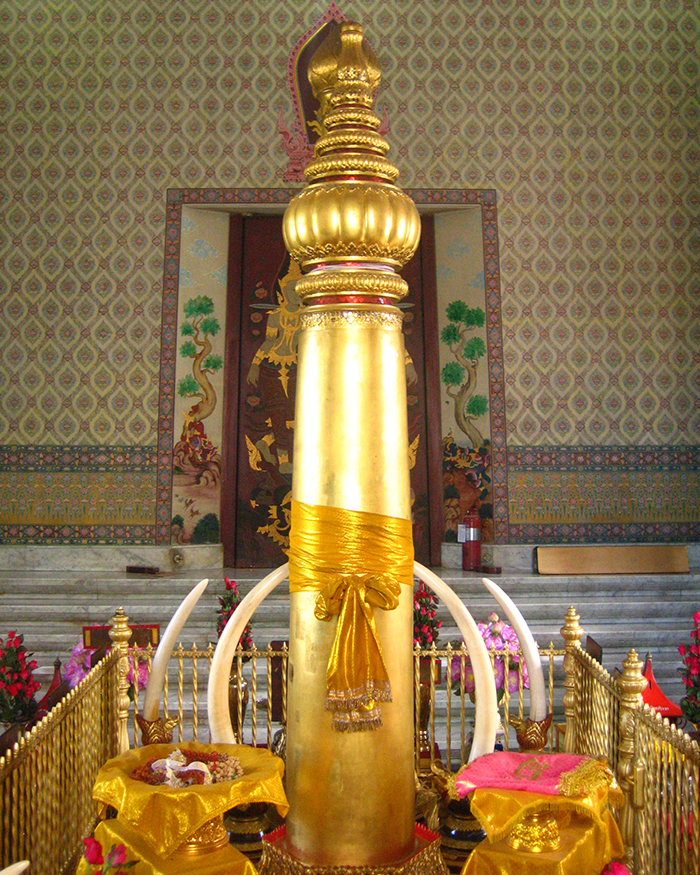 Environment
When Spiritual Relics Outlive their Usefulness: A Story of Elephant Ivory and Animism
Monday, March 17 2014

Thailand has thrived as a popular travel destination in part due to the wealth of choice and opportunity for visitors to explore. From white sand beaches to ancient temples, there is something to pique everyone’s fancy. This is particularly true for cultural heritage and sites of historical significance. Outside of Bangkok, there are numerous ancient cities – such as Sukothai and Pitsanulok – that harken back to the age of kings and conquest.

Yet one of the best kept secret relics lies in the heart of Bangkok. Just outside the famous Grand Palace complex, the Bangkok City Pillar Shrine is the mystical and spiritual heart of the kingdom. The Tourism Authority of Thailand explains that “according to the ancient Siamese (Thai) belief, a city pillar needs to be installed upon the establishment of a new city to symbolize the stability of power.”[i] It was King Rama I of the Chakri Dynasty that oversaw the creation of Bangkok’s City Pillar Shrine in 1782.

When you enter the City Pillar Shrine, you are stepping into a spiritual portal that connects to the heavens. Or so local folklore would have you believe. It is in honor and reverence to this folklore that several elephant tusks are polished and adorned around the central pillar. They are thought to further validate the special power and exclusivity of the shrine, providing a sort of cosmic legitimacy.

From the earliest days of the Thai monarchy, kings would wage wars and conquer enemies on the backs of elephants. The massive pachyderms were a mirror to the massive aspirations and grandeur of the kingdom itself. And the raw material of the elephant tusk, ivory, was considered a sacred material with special powers. Only the elusive rhinoceros and elephant sported such elegant features. White elephants were considered especially rare and precious – so much so that any villager who came across a white elephant was dutifully bound to present it as a gift to the ruling king.

Now fast forward to the present moment. Some estimates count as many as 100,000 elephants in Thailand as of the year 1850 A.D. Today, there are believed to be less than 3,000 – a 97% decline in population over a 125-year period.[ii] As a result of this downward trend, nonprofit and wildlife conservation groups list the Asian elephant as an endangered species and thus protected under international law. The leading threat to these elephants is loss of habitat due to conversion of forests to urban dwellings and agricultural land. As a result, human-elephant conflict has been expanding and has placed increased risks to elephant populations.

The illegal poaching of elephants for their ivory is also a threat. The major market for poached ivory is Asia, led by China and Vietnam. But Thailand has historically been an entry point for illegal ivory shipments originating in Malaysia, India and as far away as Africa. From Thailand, traffickers can then shift the cargo to the major destination markets (Vietnam and China). This trade has endured, even in the face of international pressure and intensive scrutiny from the global community, in part due to the complicated legal framework for addressing the issue.

In 2013, Bangkok was the host city of the annual conference for the Convention on International Trade in Endangered Species (CITES), the most important body of international governance to protect species such as the elephant. With the eyes of the world’s conservation community on Thailand, Prime Minister Yingluck Shinawatra issued a strong message that Thailand would no longer support the ivory trade and took steps to end the practice nationally. The New York Times estimated that Thailand is the “second biggest market for illicit elephant tusks”, so the ramifications of the Prime Minister’s commitment are significant.[iii]

This position will require significant adjustments to historical wildlife protection policies in order to be tenable. According to a report by Daniel Stiles on behalf of TRAFFIC, a collaboration of the World Wildlife Fund and the IUCN, Thailand’s legal framework in the modern era has left numerous loopholes which allow for legal trade in ivory.[iv] For instance, the killing or capture of wild elephants (and removal of their ivory) would be considered illegal under the Wild Animal Reservation and Protection Act of 1992; but the removal of tusks and subsequent trade would be legal if the ivory originated from a domesticated elephant. Naturally, those caught with ivory learned to tell law enforcement officials that the source was a domesticated elephant and therefore legal. Given these historical nuances, the full extent of the country’s new stance on banning the national ivory trade is not yet clear.

The fact that elephant ivory is still used in Bangkok’s City Pillar Shrine demonstrates that even though Thailand has relented to the pressures of the international community to crack down on the trade, the cultural belief in ivory’s power has remained. A 2001 survey by TRAFFIC found over 26,000 ivory products for sale in Thailand. [v] Hence, there is little doubt that numerous ivory relics – both historical and commercial – will remain scattered throughout the country even following the trade ban.