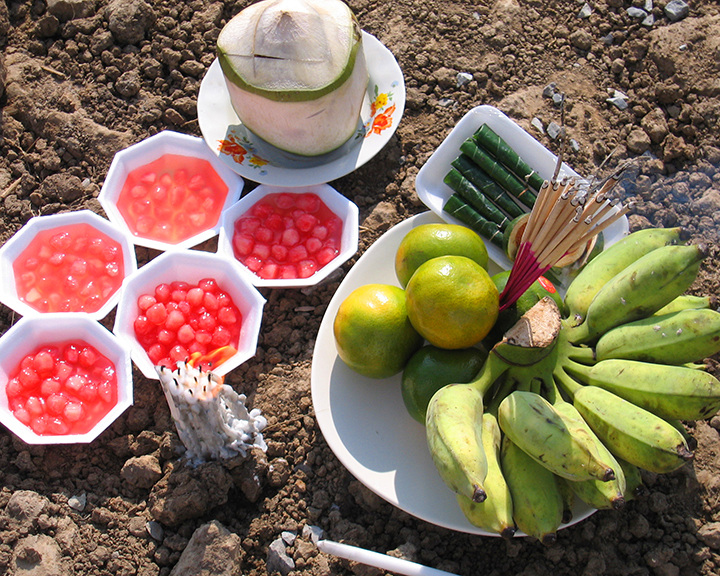 The personification of Mother Earth in Thailand is Mae Thorani. She is represented as a beautiful woman with water flowing down her long hair. Mae means mother in Thai, and Thorani comes from the Sanskrit word dharani meaning earth. Mae Thorani is the earth mother who embodies our planet as well as the magnetic energy gates that connect us to the cosmos. She is depicted as a woman with water flowing down her hair that comes from her role in the Buddhist story called “The confrontation with Mara”:

The historical Buddha Sidhartha Gotama had many past lives “innumerable as the sands in the Ganges River”. During each of those lives his good merits fell like water droplets into the earth for Mae Thorani to witness. On the day that the Buddha was about to reach enlightenment, the demon of illusion named Mara, came to tempt and challenge him with his demon armies. In response the Buddha touched the ground and Mae Thorani appeared. Mae Thorani wrung her hair with her hands so that the accumulated droplets of the Buddha’s merit poured out causing a huge flood that washed away Mara and his armies. This is the moment of the Buddha’s enlightenment when he made the gesture of ‘calling earth to bear witness’.

Of all beings, creatures or people, the Buddha chose Mother Earth to be the ultimate witness of his spiritual awakening, and understandably so- this planet is our life source, our home, our witness, and perfection. The story shows that the Buddha acknowledges Mother Earth as a pivotal aspect of his process of enlightenment, uniting the material world with the transcendental.

In Thailand, the common way to pay respect to Mae Thorani is by simply pouring water on the earth with a clear heart and mind. Mae Thorani is invoked at the very beginning of a spirit house ceremony to clear negativity and open the energy gates so the land guardians and angels can be invited to come into the spirit house. During the ritual, the offerings to Mae Thorani are much different from what is given to other spirits. After all, she is more than a spirit, she is Mother Earth! The numbers of offerings here are chosen by the priest as numerological correspondences to astrological forces.

OFFERINGS TO MAE THORANEE IN THE SPIRIT HOUSE CEREMONY