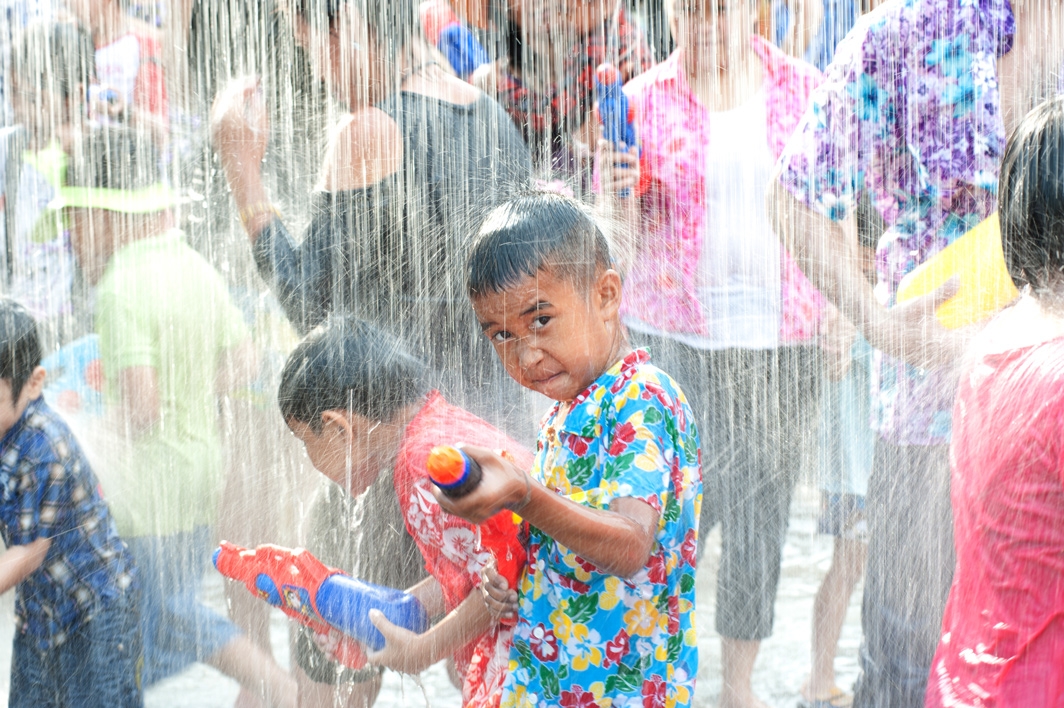 The month of April is a special time. It is a time when we celebrate Earth Month and it is also the month of Songkran, the Thai New Year celebration. Thai New Year starts when the full moon swells at the apex of the constellation Aries. Aries is the beginning of the zodiac in eastern astrology and supports the energy flow of new beginnings and breaking out of old habits. In the West it is springtime, but in Thailand it is the peak of the dry hot season. In anticipation of the rainy season to come Thai people celebrate Songkran by playing with water and making purification rituals. I never really understood what this meant, until I dove in to a Songkran festival for myself.

Here is a story of my first enlightened Songkran:

Business is closed. There is nothing to do but breathe. It’s so nice to have a quiet and peaceful Bangkok. Not even one tuk tuk can be heard. But as much as I yearn to delve into relaxing activities, the stars know it is not a day for rest. The Thai New Year is a day of community.

The morning started with my pal Adrian nudging me to come out and play Songkran. I dreaded it. I dreaded water being poured all over me in the dirty city streets and I didn’t see the point or sanuk (fun) in it at all. If there is one thing that makes me cringe it is being wet and cold at the same time. And no matter how hot the weather is, wet means cold. In addition Adrian wanted to go to the most crowded area of town for Songkran. Sensing a force of something greater beyond my comfort zone, I said yes!

I walked out of my building to meet Adrian and his girlfriend in a black bathing suit, black t-shirt, jean shorts and sun glasses. Before I could even reach the air-conditioned taxi, the building security guards caught me and kindly poured small buckets of water on my shoulders with a wai gesture as if to apologize. You are always a target of kind gestures and sanuk when it’s Songkran. Finally loading in to the taxi, I began to dance to the Isaan country music to relax my tense muscles as air-con icicles formed on my shirt.

Crossing town on this special holiday there was no traffic until we hit the Democracy Monument. Our car slowly nudged through crowds as people tried to splash us at the windows. Kids wrote “I love” on our window in white paste. We laughed at the parade of budding transvestites in wet white t-shirts with dark bras dancing to Thai music on the streets even around Bangkok’s grandest temple entrances. The Thais, usually the epitome of gentle kindness, looked uncharacteristically scary in their demon masks, black t-shirts and white pasted faces and oversized water guns. A water war was taking place outside the car. Inside the taxi felt safe, but nothing is permanent. With no ammo ourselves, we decided that we needed -“guns, beer and condoms”- water guns for ammunition, beer to join the party and condoms to cover our telephones (a neat trick to keep your phone from getting soaking wet). The taxi door to the 7-11 was a full surrender to a mob that wiped paste on my face, ears and mouth. Covered in white and armed with our water guns we headed into the Kaosan Rd district, the party central Thai version of a “love festival” with roads blocked off and mobs of wet people. There was even a fire truck blasting people with a fire hose!

I was so torn, - hating it and loving it at the same time- (absolutely hating being splashed, absolutely hating the feeling of strange hands from all angles wiping me with paste). The feeling reminded me of the first time I crowd-surfed at a punk rock show in high school and lost my shoe. As if in a mosh pit I started to defend myself with fists and started to gently hit the people around me. I pushed and pulled their hands off me. I cussed and spit the paste in my mouth on the ground. The tipping point came when I got splashed with a big bucket of ice water. As I clenched my fist and turned around ready to strike I stopped cold in front of the culprit; a six year old boy smiling up at me standing by his mother’s ice chest with a super-size water gun.

When we finally found Adrian’s girlfriend’s group it became much more fun. We had a tribe and a table set up with beer and snacks. For the rest of the afternoon we stood on chairs under a tree firing our water guns at the dancing crowd. Those who repeatedly fired us would eventually get pulled in our circle and attacked by all of us. Everyone was singing, screaming, laughing and dancing to the live music pouring out of the bars.

As I stood in a scene of Bangkok I had never been in before the crowd went into slow motion. I pondered how this event would seem impossible to do in America. In a crowd of thousands of people intentionally harassing each other not one fight broke out or tension was felt- except for my own fight within at the growing anger and annoyance at the situation.

At that moment I understood my Songkran: The water war tradition is to release negative emotions, old patterns and anger through the water element by crossing the boundaries that Thais have about personal space. First, you have to really be tolerant, kind, lighthearted and forgiving to allow a stranger to spray ice water on you and wipe slimy paste on your face repeatedly. And second Thais don’t hug each other much, nor touch the head, so it is very healthy for them to have this time to touch and be abnormally flirtatious without going against the norm of Thai politeness. I watched the crowd and realized how healthy for the psychology this holiday was. I had manifested anger and released frustration inside me that day and let go. Instead of hitting I smiled, and instead of bitching about the cold I felt it. I interacted with a foreign culture and strangers equally and forgivingly totally against my own boundaries of space and comfort, surrendering to being in that space and playing in it. In the large crowd of drunk screaming people, I found equanimity.

Back at home, as the suns apex in Aries settles and the full moon in Libra rises, I smile to Heaven and thank Mother Earth for this New Year and thank God I made it home.