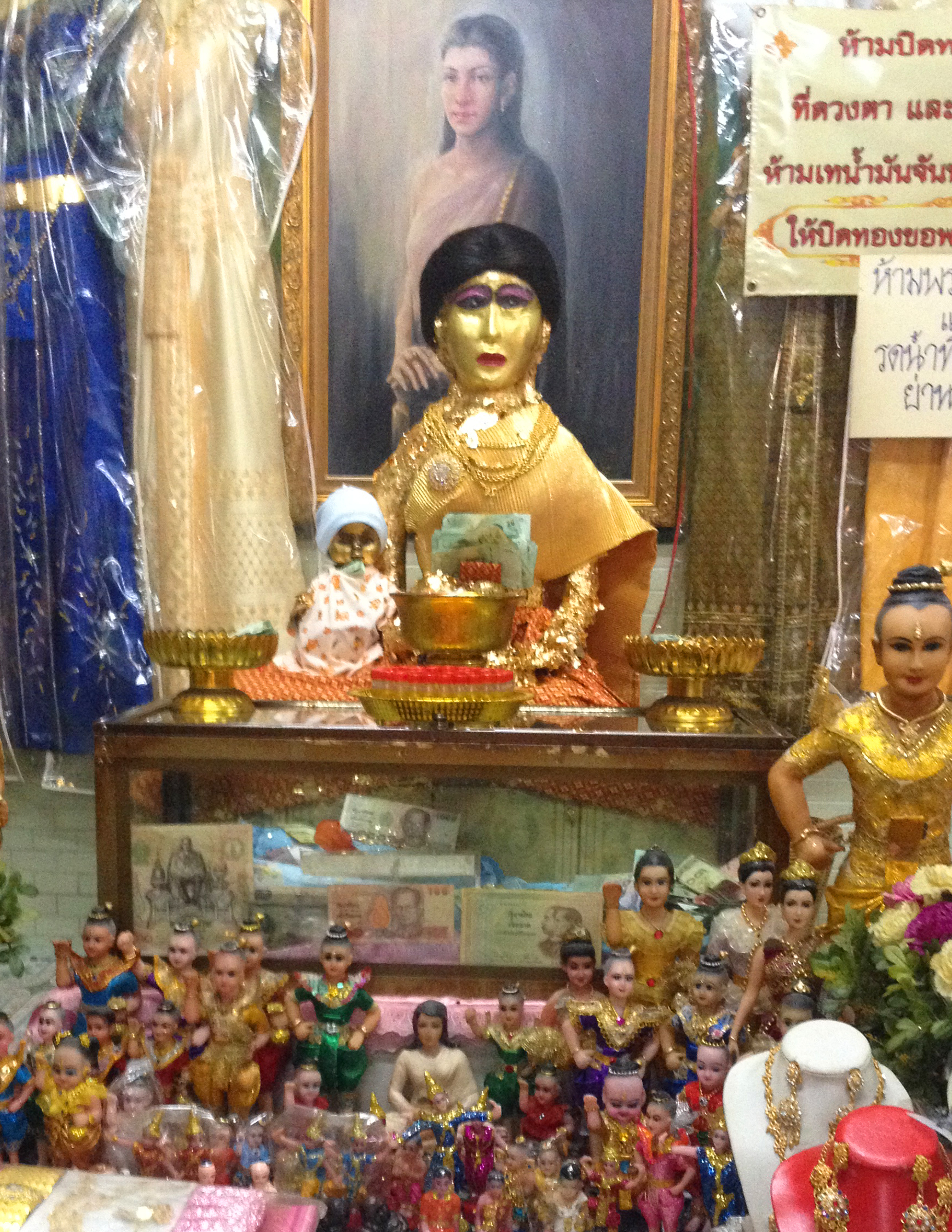 There is a place in Thailand where they celebrate Halloween all year round. No, it’s not the famous Pii Ta Khon festival where villagers dress up like ghouls and demons or the Day of the Dead in the 10th lunar month when Thais venerate their ancestors. This is a legitimate 365 day/week ghost shrine where people of all ages come to make wishes and ask for help from a powerful female ghost. Being that many of the people I interviewed at the shrine didn’t really know why they were there, I would also add that the shrine is a social phenomenon in itself where curious types go to experience the mysterious legend.

Mae Nak of Phra Kanong (Mae means mother, Nak is her name and Phra Kanong is the district where she lived) is probably the most famous centurian ghost in Thai pop culture. Over the last 70 years they have made over 15 horror movies (the most recent being a Thai blockbuster) reenacting the terrifying ghost story of endearing love. Thais believe Mae Nak has particular spiritual pull with helping 21 year old boys from getting called to military duty and attracting love into the lives of budding young fawns, to which I encountered many at the shrine. Most people told me they prayed for things in general; success, happiness and good health. One lady said she had been having nightmares and wanted to ask Mae Nak to help make them go away. My friend wanted to know the winning lottery numbers. As for me, I just asked her permission to make a video.

The story: Although she was dead, her desire persisted

About 100 years ago a married couple named Mae Nak and Tid Mak lived in a little house on the river in Phra Kanong district. Mae Nak was pregnant with child when Tid Mak was sent away to military service. While her husband was away, she died with the baby still inside her body which is an occult nightmare; a woman who dies with her baby makes for a powerful ghost spirit. When Tid Mak returned home from duty he found them alive and they lived a normal lifestyle: cooking, sleeping and playing together. All the villagers warned Tid Mak that his wife had died, but how could he believe such a thing when she was right there with him? One day when Mae Nak was preparing the dinner and a lemon fell from her hand. As the house was a Thai traditional house, it was built on stilts and the lemon fell about two meters down to the ground. When Tid Mak saw Mae Nak make her arm longer to reach for the lemon he was shocked and ran to the nearest temple, Wat Mahabut, for refuge where the ghost could not hurt him. Mae Nak’s undying love for her husband and anguish at this loss terrorized the local villagers. After many unsuccessful attempts to catch the ghost of Mae Nak, a Buddhist abbot was finally able to catch her and release her soul. They say her body is buried at the temple, the same place where they keep her shrine today.

And my version of the story...

First, when dealing with spirits of the dead, efficient Buddhist monks have the power to chant mantras and release the ghostly soul from being trapped in our human realm. So the idea that Mae Nak’s spirit is still active at the temple is a double standard.

Second, I find it interesting that Thai people enjoy coming to the ghost shrine of Mae Nak especially because it is inside a Buddhist temple where they feel protected from any evil she may do. I wonder if the shrine were not in the temple if they would be so eager to come and pray to her?

Third, there has been research done on this compelling ghost love story that found no indication that the story is true. Yes a woman named Mae Nak did die while her husband was away at military duty, but some theories pose that the couple’s children created the story to prevent their father from taking another wife.

Fourth, the spiritual power taboo associated with death and the feminine principle brings up many interesting social implications that make this legend so enduring rather then fact.

With these points in mind, I was already skeptical about my trip to the Shrine of Mae Nak Phra Kanong --- until something very strange happened. Just as I was leaving, a little voice called me back into the hypnotically feminine room with creaky wooden floors where they keep her statue to take one last photograph. (Imagine walls covered in dresses, shelves full of shoes, make up, pictures of Mae Nak and of course live television for her entertainment pleasure). As I snapped a few last shots of the room I felt a tap on my shoulder and another voice inside my head said fiercely: “Go buy me a dress for 200 baht”. I actually had no intention of giving into this racket and no idea how much a dress cost so I told my friend what happened (as a witness) and proceeded to the offering shop where they sell plastic toy cars for Mae Nak’s baby and shiny Thai dresses on hangers. More dresses piled up on the table were marked with stickers for 300 baht ($10USD). I asked the lady how much they cost and she said, “200 baht”. What? Now that was too weird, how did I know? So I gave in and bought her a dress and I am glad I did. The last thing I need is to have nightmares of Mae Nak, although I did have to bare my Thai friend making fun of me by repeating famous lines from the horror film in a bone chilling ghost voice the whole ride home.

For an impressive social essay and critic on the legend/movie Nang Nak, read http://www.lrc.cornell.edu/asian/faculty/fuhrmann%20discourse

toy cars piled up as offerings to the baby boy spirit