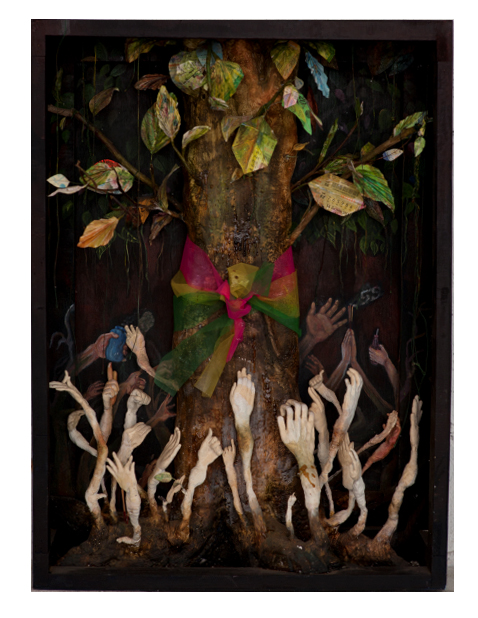 Craving. We all know it.

It’s programmed in our desire to exist, to live, to love and enjoy. The media thrives on our cravings and constantly feeds us more of them to indulge their own. Ultimately it is our choice to consume or live a conscious life. The Buddha described the mess of perpetual desire (tanha in Pali) as a knotted ball of string that keeps us bound up in suffering and rebirth. The way to unravel the string and become enlightened is clearly mapped out in the Buddha’s Eight Fold Path. Most Thai people know this path very well, it is often taught in the temple.

Years ago I stumbled upon a vintage warehouse in the Ladprao district of Bangkok filled with the junk of peoples abandoned desires. Hidden in a dark corner filled with mod furniture and mannequin heads was an unexpected piece of art called a shadow box. Just as its name suggests a shadowbox is a box filled with a group of 3-D that creates a dramatic visual result. In this shadow box (pictured to the left) ghostly hands desperately reach up from the earth, grasping at a beautiful tree wrapped up in colorful gauze cloth. The leaves of the tree are made out of Thai lottery tickets. Some of the hands even hold real incense sticks in a gesture of prayer.

The image was too familiar. I had taken many photos of these wish fulfilling trees around Thailand. Thai people believe that certain trees have a spirit and can grant them their wishes, especially winning lottery numbers. Unfortunately the ghoulish hands do not appear in my photos, but the artist’s message is clear: Thai animism as we see it today is plagued by tanha, desire. The artist’s choice of grasping hands reflects his understanding of the Buddha’s teaching and is a critique on Thai society and superstitious materialism.

A real wish fulfilling tree in the Sukhimvit districs of Bangkok

The goal of Buddhism and animism is not the same. People do not pray at trees or spirit houses to become enlightened (by the Buddhist definition of enlightenment). Animism is pre-Buddhist and serves a purpose for certain needs that are pre-Buddhist. In my opinion, this is why the Buddha did not outright reject and condemn animistic beliefs. Instead he did something interesting; he integrated animist beliefs into Buddhism and left out the un-useful parts. To cut off the animistic roots of Buddhism is like cutting off the Buddha’s body and showcasing only his head (not surprisingly it happens all the time). The confusion arises when people linger in the pre-integral state. This situation exists all over the world where we have many different realities of spiritual goals and experiences misunderstanding and condemning each other.

So the next question arises, is there an animism not plagued by tanha? Yes. Are there Buddhists consumed by tanha? Yes! There is also a kind of desire that is not tanha called compassionate non-self-motivated desire that we all have access to regardless of race or beliefs.

I appreciate this piece of art because it’s nice to see creativity used to reflect on one's cultural beliefs in search for liberation. The artist is right; magic trees and lotto tickets are not a part of the Buddhist Eight Fold Path to enlightenment. But neither is praying to the Buddha for help to get a new job, or buying too many pairs of shoes. At the end of the day, regardless of what we grasp for or reject, and regardless of what spiritual beliefs we hold tanha is just tanha.

Read a translation of the tanha sutta here: