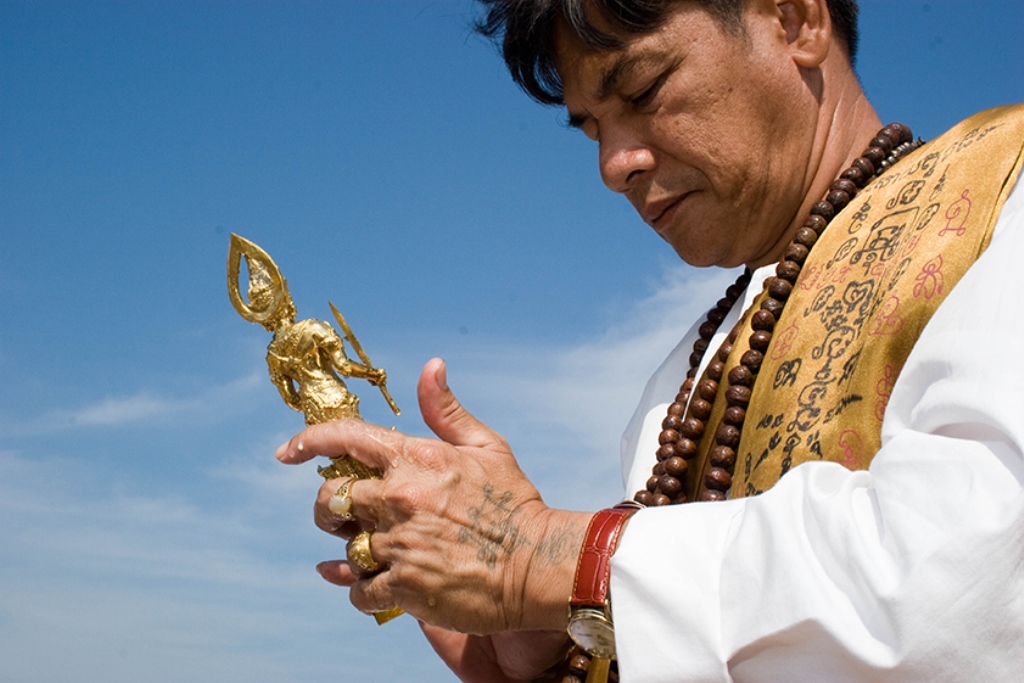 The bright ochre robes of Buddhist monks have long been an iconic symbol of Thailand’s mysterious charm. For years my Thai family mother would take me with her to see those with reputations for reading the future, activating amulets with accident proof powers, or teaching Dhamma to navigate our life challenges. Although these ascetic men play a major role as spiritual counselors in the lives of the average Thai, there are other men and women outside the temple addressing issues that Buddhist monks can’t due to monastic rules and formalities. They are called Ajan (teacher) Kru (master) and Mo (shaman or healer), Rusee (Rishi), Kruba ajarn (master-teacher), Chipa khao (one who wears white robes) or Bhoomi baan (world-house seer). They have been recorded in ancient texts as charismatic leaders and have carried on Thailand’s spirit house tradition for thousands of years. I call them shaman- brahmin priests, because of their unique skillset that combines ecstatic trance and formal Brahmin ritual conduct within a Buddhist cosmology.

You won’t find new age books about them or their gurus in the English bookstore. The shaman- brahmin priests of Thailand are predominantly low profile males tucked away in the local villages (there are women shaman-priests too, but few). Many have spent time as Buddhist monks, as is the traditional rite of passage for young men in Thai culture. They are proficient in Pali, Sanskrit and often Khom (an ancient Cambodian language used in the occult). They have normal day jobs like bus driver, policeman, farmer, or teacher. They have spouses and children. They pay bills, go to temple and donate to charity. Most often these men and women did not seek out their supernatural side jobs, rather the spirit world found them.

The first shaman- brahmin priest I ever met was a master in Bangkok named Ajarn Somchai. His creaky teak house alone was a gateway into another realm. At the entrance a sign pointed to a windy path that read, “Astrologer and Master of Spirit”. The tiny front door was guarded by a statue of Mother Earth; a fountain of water trickled down her hair into a plethora of flowering plants with lucky names surrounding her feet. Our meeting room, his sacred space, was up a narrow staircase that passed by endless rooms of lounging family members. The focal point was a large alter that arranged the Thai invisible realms according to a strict hierarchy- In the center a grand Buddha statue surrounded by a multitude of more Buddha images, to the left statues of Hindu deities, rishis and angels and to the right Thai royal spirits, naga dragons and nature spirits. Books stacked in rows ranged from love spells and sacred tattoos to medicinal remedies for healing pains in the body, ancient Khmer texts and an astrology computer program.

Ajarn Somchai’s vibrant voice and composed presence reflect military training combined with years of meditation. He was initiated into the spirit world through a tattoo protection ceremony when he became a policeman. “It is common for police to be interested in things that have sacred power (sing saksit),” he says, “but not many succeed to become a master.”

Becoming a master is as much grace as it is effort. After intense meditation and instruction from his teacher, he was visited by an ascended guru in the form of a spirit from whom he still receives supernatural power. The extra-ordinary perceptions allow Ajarn Somchai to lead groups of people through life-cycle rituals, spirit channeling sessions, physical healing and psychological consultation. These transformational moments focus on recollecting the soul and establishing a connection with higher beings such as angels, called Thevada, in Thai. My main interest was his ability to communicate with the spiritual guardians of the land through the spirit house ritual.

Spirit houses are small structures offered to the spirit guardians of the land, to honor their presence and create harmony on one’s property. In Thailand, the ritual to install a spirit house can only be done by an expert who is proficient in communicating with the spirit world. These kinds of elaborate ceremonies that deal with the spirit world are against the rules of Buddhist monks, therefor the tradition has been maintained by the shaman- brahmin priests. His role in the spirit house tradition is manifold; he energetically maps out the property, chooses the color, size and architecture of the spirit house with the land owner, helps them acquire the spirit house, communicates with the spirits of the land, prepares the ceremony, clears the land of negative energy, chants and directs the ceremony, calls in the angels, invites the energies into the statues, seals the deal and closes the circle. He will return for special occasions and becomes a kind of family priest or spiritual counselor for their energetic home life. In addition to shaman- brahmin priest the family will invite Buddhist monks to come and perform a general house blessing ritual, harmoniously integrating the layers of animistic, Brahmin and Buddhist rites- in other words covering all bases.

The current spirit house installation ritual has a code of guidelines that all priests follow and there are many books available in the Thai market. The rules of ritual are regulated by the Royal Raja Kru, an elite South Indian-Thai bloodline of Brahmin priests that serve the Thai Royal family and date back to the Ayuttaya period. This aspect of the spirit house tradition is Hindu in myth and rite, and over the centuries has adapted a particular Thai flavor. Master priests who live in Bangkok have the opportunity to participate in the royal priestly circles. Ajarn Somchai teaches Traditional Thai Ceremony classes at the Thai Astrology Association under the patronage of the Queen, one of two major astrology schools in Bangkok comprised of intellectuals, doctorates and well-known personalities. All books published by the Thai Astrology Association are presented to the royal family and must pass through the hands of the Royal Raja Kru to be checked on accuracy. This spiritual authority gives their work credibility, which is useful in Thailand where Buddhist monastic life is regarded as pure and other practices may be tainted with black magic or charlatans. It is no secret that wild Thai shamans can cross over to the dark side, and this power can be irresistible to those lured by power, money and passion. The integrity of the shaman-brahmin priest’s contribution to society is maintained through his reputation. This is sustained by his charities and service to bring harmonious and spiritual messages to the people for a better humanity.

Although the ritual protocol of the Royal Brahmin priests plays a large role in keeping the shaman-brahmin ‘s practices standardized and energetically pure, not all priests around the country have the opportunity to interact with them. As a result depending on the region, most spirit house rituals combine local beliefs with the royal guidelines and rely on another kind of lineage of masters to transmit the energy of the tradition. These practices are animistic in nature and come from a blend of indigenous explorations of the spirit world passed down from the village elders to Indian influenced shamanism inspired by the rishis.

The tradition of holy men called rishi, in Thai rusee, means sage or seer. Rishis are ancient hermits who live outside the community and practice mysticism. With a strong discipline of body and mind the rishis are known to have acquired supernatural powers. The Hindu god Siva is considered to be the first and greatest of rishis. Siva transmitted the arts of yoga, music and dance to the lineage of rishis who channel this knowledge through the shaman- brahmin priests today. In Thailand they are the masters of performing arts, herbal medicine, magical tattoos and mystical rituals. In folktales, rishis play the role of helpers and teachers of the arts to whom young heroes go out into the forest seeking knowledge and advice. South East Asian history attributes rishi to omens, prophecies and miracles. Numerous stories abound in Thai history such as the Rishi Vasudeva who founded the ancient kingdom of Haripunchai in present day Lamphun, and Rishi Varsuthep, who resided in the caves of the famous mountain in Doi Suthep, Chiang Mai. Known to live around contemplative caves filled with supernatural beings, “rishi caves” are popular destinations for adventure seekers who wish to experience deep meditation. If you are lucky you may encounter one of the few remaining real rishis still living in the Thai forests.

In the bustling city of Bangkok Ajarn Somchai has a more rigorous schedule than the classic rishis of the forest. A calendar on his wall is fully booked with spirit house rituals for the next lunar year. One of his projects involves a large high rise building being constructed on the same road as his own traditional teak house. As he explained how he is working with architects to create a contemporary glass pyramid shaped spirit house (designed to lift the energy up to the summit of the building) I could see a twinkle in his eye. As landscapes and lifestyles change in Thailand, so do the shaman-brahmans priests, with a spontaneity and creativity I admire. Their radical integration of ecstatic trance with disciplined meditation and ritual performance gives them a freedom to adapt spiritual practices into the present. Their influence on the local level preserves indigenous customs and a lineage of connection with the supernatural that Orthodox Buddhism and Ritual Hinduism place less importance. While Buddhist monks may be the face of Thailand’s spirituality, behind the scenes shaman-priests are lighting up the path to the spirit world.

comments powered by Disqus
What is a Spirit House? NEXT >