People often ask me, what do Thais do with old or broken spirit houses? Here is your answer.

Under the shade of a pair of Bodhi trees in Chiang Mai lay to rest dozens of abandoned spirit houses, headless Buddha statues and broken dolls. It is a confused and mysterious scene: the upright majesty of Bodhi trees surrounded by the golden chaos of orphaned spiritual relics. For years I have heard these astral trash dumps referred to as “spirit house graveyards” by the Thai people. The government forbids them; signs posted above many graveyards state, “Do not throw spirit houses away here.” Locals complain that the graveyards are “dirty” and “no good”. The authorities on spirit houses, the Shaman-Brahman priests, explain that the graveyards do not follow spirit house etiquette and are an energetic nightmare. Many Thais view the graveyards as unsophisticated animist superstition, revealing the dark shadow of their own religious beliefs. The heaps of these spiritual relics irresponsibly removed and littered on public property could pose one of the biggest dilemmas for the spirit house tradition as it adapts to modern lifestyles. The bright side is that this issue is an opportunity to bring awareness to outdated behaviors and beliefs.

You can find spirit house graveyards all over the Thailand. They pile up near railroad tracks, in Buddhist temples, on windy roads and in the middle of busy intersections -- always under a large tree, especially Bodhi trees. Thais believe that different species of trees have different spirits. The Bodhi tree (Ficus religiosa) is the tree the Buddha chose to sit under when he became enlightened and is considered to have an angel spirit inside called a thewaada. These powerful angels are believed to console and contain the displaced souls that gather around abandoned spirit houses.

I used to think that the reason people threw their spirit houses away was because they were structurally damaged or broken. Most spirit houses don’t last long; the monsoons wash away their paint, the wind knocks over their spires and animals use them as a refuge. But on further investigation I noticed that many of the relics thrown in the graveyards are in fair condition! One time my mom found a perfectly good statue laying on a pile of leaves in a spirit house graveyard. She wanted to take it because she felt it was a shame to see such a pretty little statue go to waste-- “supernatural recycling” we joked. I warned her of the consequences of bringing home a wandering spirit that could inhabit the vacant statue and she dropped it like a loaded gun. The statue is probably still there today.

The reason Thais throw away perfectly good spirit houses has to do with their relationship to phii, or spirits. The human realm is just one dimension of conscious beings made up of spirits, ghosts, tutelary spirits, ancestor spirits, angels, devas and gods that populate the universe. Phii can be separated into three main groups. The first two are good (phii) and bad (phii rai) spirits; the third is heavenly beings(phii fa) that are also found in Hindu and Buddhist cosmology. The word phii fa is often used interchangeably with thewaada (coming from Indian Sanskrit devata). This is the same thewaada spirit in a Bodhi tree.

The spirits inside a spirit house are called jao phii or “lord spirits” and belong to the group of good phii. (Jao phii is the same as jao thii, lord spirit of the place). They are the guardian spirits of the forests, rice fields, cities, villages and properties. Their influence over the material resources of the land makes them a very intimate and vital presence in the agricultural society of Thailand. Like Nature’s unpredictable moods, their powers are both productive and destructive: they can protect, grant wishes and ensure crops, as well as cause accidents, sickness and even death. In order to maintain a harmonious relationship with the land guardians, Thai people honor them with a spirit house. Thais believe that the jao thii spirits can be persuaded to grant wishes by petitioning them with special offerings like a pigs head, fancy sweets, or dancing girls. But for a really big negotiation, one of the most irresistible offers is a new spirit house to live in, usually a much bigger one. Who wouldn’t want a bigger brand new house?

The land guardians are also known to communicate their needs to the land owners through dreams or omens. One man told me that he knew his spirit house was getting old so he asked the spirits to give him a sign. The next day the statue of the angel inside the house had fallen over. He took this as a clear answer. But before he replaced the spirit house he made a deal with the jao thii: he promised to replace the spirit house if the guardian spirit would help his wife become pregnant. Today they have a baby and a new spirit house. I was happy to hear that he did not dump his old spirit house into a graveyard, but rather disposed of it properly.

When a spirit house is thrown away without a proper ceremony, it becomes a magnet for wandering and lost spirits, turning spirit house graveyards into a 24 hour ghost party. Phii rai, the class of bad spirits, are malevolent ghosts who suffered a traumatic death and are trapped in an astral limbo. They can be seen roaming around at night, especially near graveyards and temples on the dark moon. Some examples are phii har (disease spirit), phii pbaa (barbarious forest spirit), phii krasaer (filth eating spirit) and phii pob (evil spirit). It is believed these hungry ghosts roam around looking for a place to stay, food to eat, anything to comfort their suffering or appease their revenge. They are attracted to spaces associated with bad events such as unpleasant deaths as well as neglected and abandoned spirit houses.

The cleanup of a spirit house graveyard is usually initiated by the local government and is a process that requires a highly trained expert who knows how to deal with the spirit world-- call it ghost busting par exellence. I have been told by the priests that they do their best, but there is no guarantee that all of the sticky spirit residue can be cleared. The proper way to replace or dispose of a spirit house on a property is for the ritual expert to do a spirit removal ceremony. First he will choose an auspicious day and time based on astrology. It is very important to have the full participation of the cosmos when disturbing the spirit world. Then he will apologize and ask the main inhabitant of the spirit house to leave. Finally the priest will close the gate to the astral world by using special mantras and holy water, preventing any random phi rai from shacking up in the house. Once the relic is empty it is smashed to bits and buried into the Earth. Now that is what I call a proper graveyard.

For whatever the reason Thai people throw away their spirit houses, doing it without a ceremony is just plain lazy and spiritually irresponsible. If they can afford a new spirit house then they can afford to pay for a proper removal ceremony. It is likely that the people throwing spirit houses away are simply ignorant to the rules of spirit house etiquette--they see other people throwing the houses away at a Bodhi tree and think that is the right thing to do. Meanwhile everyone else is too terrified to touch these places or clean them up. It is this fear and greed that gives spirit houses a bad rap, and replaces the sacred purpose of the spirit house tradition as a place of respect and connection with superstitious activity.

Luckily there are heroes who see beyond the limitations of superstitious fear and skeptical criticism. Fifteen years ago Khun Sackchai, an insurance salesman, was tired of seeing the spirit house graveyards littered around his hometown of Ayutayya. So he took on the project to gather the abandoned spirit houses and turned his property into a spirit house orphan museum. Today he has over 4,000 spirit houses organized into neatly arranged rows intentionally surrounded by a thick bamboo forest. In Thailand bamboo is a plant associated with death and rebirth. The museum has had a lot of attention from the press, reminding the public not to throw away their spirit houses. Many Thais immediately feel afraid to come to such a place, while Khun Sakchai reminds his visitors that there is nothing to fear when intentions are made with a pure heart and metta, or loving kindness.

Khun Sakchai’s philosophy is a reminder of the Buddha’s teaching.Thailand is a Buddhist country, and most all Thais are familiar with the sermons of the Buddha on the nature of the ego, greed, hatred and delusion. Buddhism teaches that we are all responsible for our own actions, our own lives and our own karma. To depend on something else for success and not take responsibility for our own thoughts and actions is ignorant. Never the less, spirit houses pre-date Buddhism and continue to serve the Thai psyche in a deeper way than the superficial gratifications that they appear to be used for. Besides being used to cope with the challenges that nature presents, spirit houses give the Thai a deep connection to their collective ethnic origins and a valuable respect for the land. The integrity of the spirit house tradition declines when fear and greed replace respect; appreciation for the land is perverted into a desire to possess the land. The misunderstanding of a separate self that seeks to possess nature rather than live in a harmonious relationship with nature creates the guilt and fear that drives superstition.

There are some useful questions for the modern Thais to reflect on when they approach a spirit house: Is your prayer respectful or petitionary? Is it contemplative or greedy? There is nothing wrong with asking for a little help from the ancestral spirits and land guardians while embracing the mystery and gratitude for our planet at the same time. With this awareness maybe Thais could create more sustainable ways to negotiate deals with the land guardians and rediscover contentment in the basic fruits of life which Mother Nature provides.

comments powered by Disqus
< PREVIOUS SPIRIT OF THE MOUNTAIN 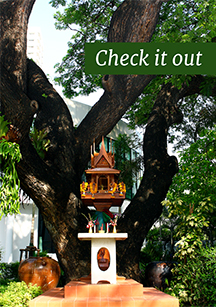